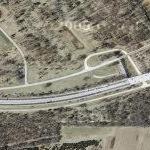 By darkhorse219 @ 2005-06-11 21:18:08
@ 38.50884, -90.602188
Eureka, Missouri (MO), US
The town of Times Beach was disincorporated, evacuated and bulldozed in the mid 1980's, after it was discovered that much of the towns roadways and parks were constructed with contaminated dirt. The contamination came from a pesticide plant, owned by Syntex Agribusiness, Inc., which sprinkled the area with dioxins as well as several other toxic chemicals. An incinerator was constructed and the toxic material was burned, along with material shipped in from 26 other contaminated sites in the country. The incineration took several years, and 265,000 tons of soil and debris was burned by the time the incineration stopped in 1997.