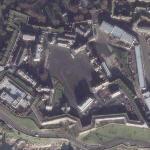 By the end of the 17th century the emphasis on defence changed due to developments in armaments from a central defensive unit to new forts and gun batteries in a ring around the Dockyard and the approaches to it.
Links: www.ecastles.co.uk
610 views