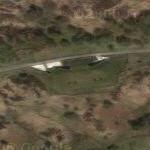 By kjfitz @ 2005-06-22 19:01:02
@ 56.158386, -4.770255
Dumbarton, United Kingdom (GB)
Extensive facilities to support the Trident system have been constructed at the Naval Base at Faslane, the home of the UK strategic nuclear deterrent force, and the Royal Naval Armament Depot [RNAD] at Coulport in the Clyde Area. Sixteen atom bomb storage bunkers have been built in a ridge overlooking Loch Long. Trident missile warheads are stored at the RNAD Coulport weapons depot, where they are installed and removed from the submarine. Trident missiles can also be loaded, unloaded and stored at RNAD Coulport, though this is usually done at Kings Bay in the US. Unlike the Polaris system, Trident missiles will not be serviced at Coulport but will be returned to the United States Strategic Weapons Facility Atlantic, at Kings Bay in Georgia, for reprocessing at periodic intervals. This arrangement has meant that the UK has not had to construct its own reprocessing facilities. RNAD Coulport is also a storage and loading facility for conventional torpedoes.
1,355 views