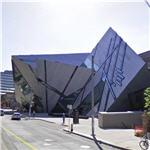 The museum is currently undergoing a major renovation and expansion project, dubbed Renaissance ROM. The centrepiece is the recently-opened Michael Lee-Chin Crystal, designed by architect Daniel Libeskind and Bregman + Hamann Architects; installation of exhibits in the addition will continue over a period of months. Existing galleries and buildings are also being modified. Renovated galleries in the historic buildings will reopen in stages, and all work is scheduled to be completed by 2010. The final cost of the project will be $270 million CAD.

The Libeskind design, selected from among 50 entrants in an international competition, saw the award winning Terrace Galleries torn down and replaced with a Deconstructivist crystalline-form clad in 25 percent glass and 75 percent aluminium. The building is named after Michael Lee-Chin, who donated $30 million towards its construction. It houses the new main entrance to the museum, a gift shop, a restaurant (C5 Restaurant and Lounge), a cafeteria (Food Studio), seven additional galleries and Canada's largest temporary exhibition hall in the lower level.
Links: en.wikipedia.org
1,077 views