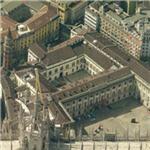 Originally designed with a system of two yards, later partially demolished to make way for the Duomo, the palace is located to the right of the facade of the cathedral opposite to the Galleria Vittorio Emanuele II. The facade of the building, following the line of the ancient courtyard, forms a recess with respect to Piazza del Duomo, known as the Piazzetta Reale (English: "Small Royal square").

The palace houses the Hall of Caryatids on the first floor, which occupies the site of the old theater burned in 1776. It is the only room which has survived the heavy bombing of the 1943, when the palace lost its Neoclassical interiors.
Links: en.wikipedia.org
752 views