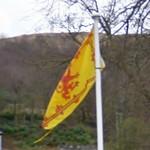 Used historically by the King of Scots, the Royal Standard of Scotland differs from Scotland's national flag, the Saltire, in that its correct use is restricted by an Act of the Parliament of Scotland to only a few Great Officers of State who officially represent the Sovereign in Scotland. It is also used in an official capacity at royal residences in Scotland when the Sovereign is not present.
Links: en.wikipedia.org
435 views