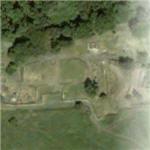 Tusculum is one of the largest Roman cities in Alban Hills. The ruins of Tusculum are located on Tuscolo hill—more specifically on the northern edge of the outer crater ring of the Alban volcano. The volcano itself is located in the Alban Hills 6 km (4 miles) north-east of the present-day town of Frascati .
Links: en.wikipedia.org
1,367 views