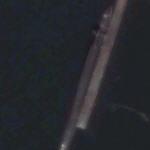 By kjfitz @ 2006-06-13 01:00:00
@ 52.9148, 158.494067
Petropavlovsk-Kamchatskiy, Russian Federation (RU)
The 667BDR Kal'mar (Squid) Delta-III class Submarine was a large Ballistic Missile Submarine. Like the earlier Delta class submarines the Delta III is a double hulled design with a thin low magnetic steel outer hull wrapped around a thicker inner pressure hull. Development began in 1972 at the Rubin central design bureau for marine engineering. The submarine was the first that could launch any number of missiles in a single salvo, also the first submarine capable of carrying ballistic missiles with multiple independently targetable reentry vehicles . The submarine carried 16 of the R-29R missiles each carrying 3 to 7 MIRVs, with a range of 6,500 to 8,000 km, depending on the number of re-entry vehicles.
Links: en.wikipedia.org
6,430 views