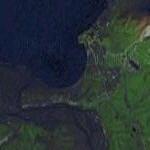 By kjfitz @ 2005-12-08 11:33:30
@ 73.386315, 54.750538
Novaya Zemlya, Russian Federation (RU)
Novaya Zemlya was the site of extensive Soviet atmospheric and underground testing, including the largest thermonuclear device ever tested, a 58 megaton air-dropped bomb detonated October 23, 1961. Of the 42 underground explosions at Novaya Zemlya, 25 were accompanied by release of radioactive inert gases. There were three underwater explosions, each less than 20 kiloton, but most of the radionuclides remained in the water and sediments. A total of 17 reactors were dumped in the Barents Sea, to the west of Novaya Zemlya, including seven containing spent nuclear fuel.

Sub-critical hydrodynamic experiments with separate elements of nuclear ordnance are currently conducted at the Novaya Zemlya testing range. At least four or six such studies are conducted on Novaya Zemlya. These tests allow evaluation of criteria under which it is possible to store, transport and use nuclear ordnance safely.
Links: www.globalsecurity.org
8,352 views