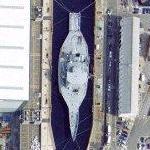 The Triton Trimaran Research Ship was a technology demonstrator ship for the Royal Navy's Future Surface Combatant (FSC) frigate requirement, due to enter service from 2013 and replace the Type 23 frigates. Triton is the world's largest motor powered trimaran (triple-hulled) vessel, with a length of 90m and beam of 22m. QinetiQ (formerly DERA, the Defence Evaluation and Research Agency) funded the design and manufacture of the vessel, to be used to quantify the structural and seakeeping performance of the trimaran.

Following completion of the trials programme, Triton has been used as a trials platform for other QinetiQ technologies including the composite propeller.

Triton was the launch vessel for the QinetiQ 1 programme to break the world altitude record for a manned balloon. The target altitude of 25 miles (132,000ft) would take the two pilots into the stratosphere. The giant helium-filled balloon had a 9-acre area and was as high as the Empire State Building. An attempt on the record, in September 2003, was aborted after an 8m tear appeared in the helium balloon envelope during launch.
Links: www.naval-technology.com
2,029 views