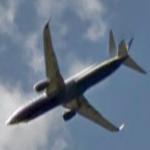 Łódź Władysław Reymont Airport is located in the Southwest of Lodz in Poland. Its only served by three airlines: Adria Airways, Sun d'Or Airlines (seasonal) and Ryanair. However it has no connection to any polish airports since July 2012. But with the completion of the A2 motorway, Warsaw is only one hour away by road.
Links: en.wikipedia.org
301 views