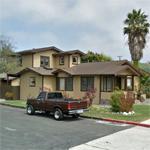 Ryan is a main character in the show, played by Elijah Wood, who watches his neighbor's dog. Ryan sees the dog as a man in a furry suit, while everyone else sees it as just a dog. The trouble-making dog is played by Jason Gann, who played the same role in the original Australian version of the show.

It appears that at least some of the interior scenes of this house were filmed here as well.
Links: en.wikipedia.org
4,130 views

milwhcky
@ 2012-06-18 22:48:17
Good question. The basement could easily have been filmed in a studio, but my gut feeling was that it was filmed here. There was a scene of Ryan peeking out the window and seeing his angry neighbor (Ethan Suplee) walking up the street, but that could have been one camera shot done separate from a studio set. The kitchen, living room, and back patio scenes are definitely at this house. I'm hoping to learn more from DVD commentary when I get my hands on it.

In this Street View, the one exposed basement window along the street is blocked by a square flower pot - perhaps to prevent nosy people from peeking in.