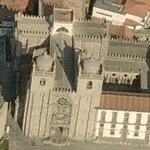 The current Cathedral of Porto underwent construction around 1110 under the patronage of Bishop Hugo and was completed in the 13th century, but there is evidence that the city has been a bishopric seat since the Suevi domination in the 5th-6th centuries.

The cathedral is flanked by two square towers, each supported with two buttresses and crowned with a cupola. The façade lacks decoration and is rather architecturally heterogeneous. It shows a Baroque porch and a beautiful Romanesque rose window under a crenellated arch, giving the impression of a fortified church.

The Romanesque nave is rather narrow and is covered by barrel vaulting. It is flanked by two aisles with a lower vault. The stone roof of the central aisle is supported by flying butresses, making the building one of the first in Portugal to use this architectonic feature.

This first Romanesque building has suffered many alterations but the general aspect of the façade has remained romanesque.
Links: en.wikipedia.org
814 views