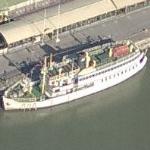 The ship was built in Helsinki, Finland in 1938 and was at the time a modern, icebreaking inspection vessel. The vessel was the first inspection vessel of the independent Finland, built by Finns for the National Board of Navigation, and her year of manufacture is the same as that of the icebreaker Sisu. She was originally known as Inspection vessel SS Turku and was built to the hull designs of the SS Sisu, the only alterations being that of the scale. Thus the SS Ukkopekka is probably the last sea-going passenger steamer designed for icebreaking still in active service.
Links: www.ukkopekka.fi
712 views