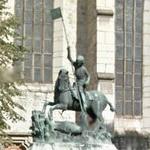 By hhgygy @ 2014-08-12 10:36:37
@ 46.768085, 23.59509
Cluj-Napoca, Romania (RO)
Made in 1373 by György and Márton Kolozsvári (Georg und Martin von Klausenburg), two brothers whose only sculpture that remained stands now in the Castle of Prague (Hradčany). Due to the importance and uniqueness of the sculpture, a number of replicas were made of it and some of them can be viewed on Streetview. Five replicas are in Hungary, four of them in Budapest (two inside a museum and a university) and one in Szeged. Two replicas are found in Romania, the most important of all replicas being the one in Cluj-Kolozsvár from where the brothers originate, and a more recent one from 2012 in Sfântu Gheorghe-Sepsiszentgyörgy.
Links: de.wikipedia.org
379 views