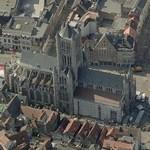 By DonMartini @ 2007-06-02 03:58:15
@ 51.053718, 3.722897
Ghent, Belgium (BE)
The St. Nicholas' Church (Dutch: Sint-Niklaaskerk) is one of the oldest and most prominent landmarks in Ghent, Belgium. Begun in the early 1200s as a replacement for an earlier Romanesque church, construction continued through the rest of the century in the local Scheldt Gothic style (named after the nearby river). Typical of this style is the use of blue-gray stone from the Tournai area, the single large tower above the crossing, and the slender turrets at the building's corners.

Built in the old trade center of Ghent next to the bustling Korenmarkt (Corn Market), St. Nicholas' Church was popular with the guilds whose members carried out their business nearby. The guilds had their own chapels which were added to the sides of the church in the 14th and 15th centuries.

The central tower, which was funded in part by the city, served as an observation post and carried the town bells until the neighboring belfry of Ghent was built. These two towers, along with the Saint Bavo Cathedral, still define the famous medieval skyline of the city center.

One of the showpieces of the church is its organ, produced by the famous French organ builder Aristide Cavaillé-Coll.
Links: en.wikipedia.org
758 views