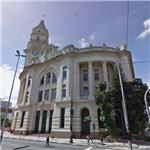 By kjfitz @ 2011-03-02 09:22:15
@ -23.535024, -46.639263
São Paulo, Brazil (BR)
The Julio Prestes Cultural Center, which is located in the Julio Prestes Train Station in the old north central section of the city of São Paulo, Brazil, was inaugurated on July 9, 1999. The building has been totally restored and renovated by the São Paulo State Government, as part of the downtown revitalization in that city. It houses the Sala São Paulo, which has a capacity of 1498 seats and is the home of the São Paulo State Symphonic Orchestra (OSESP). It is a venue for symphonic and chamber presentations and has been designed according to state of the art standards, comparable to the Boston Symphonic Hall, Musikverein in Vienna and the Concertgebouw in Amsterdam.
Links: en.wikipedia.org
881 views