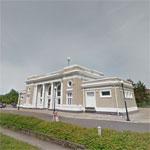 The current Beaux-Arts-style structure was constructed of masonry and is one of five masonry depots that still exist along the original Southern Pacific West Coast line. The other depots are in Albany, Medford, Roseburg and Eugene.
Links: en.wikipedia.org
602 views