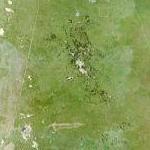 By alfjon @ 2007-03-05 00:37:03
@ 55.635942, 12.763367
Saltholm, Denmark (DK)
Saltholm (Salt Islet) is an island in the Oresund, the strait that separates Denmark from Sweden. It is located to the east of the Danish island of Amager in Tårnby municipality. The island is very flat, with a maximum altitude of 5 m above sea level, and it can be extensively flooded if persistent east winds cause a tide surge in the Baltic Sea. It is 7 km long and 3 km wide.

The island is a nature reserve for birds. There is a human population of three, who manage the reserve farm in order to keep grazing levels ideal for the nesting birds. Humans have lived in some numbers on the island since the middle ages.

Located close to Copenhagen, it was, used between 1709 and 1711 as a quarantine island when the capital suffered plague and cholera outbreaks.

In 1915 cannon batteries were installed on the island to defend the capital.

In 1941 plans were drawn up to build a new Copenhagen airport on the island. During the 1960s and 70s these plans were extensively studied. However, local protests blocked the plan, and they were eventually formally dropped in 1979.
Links: en.wikipedia.org
718 views