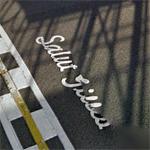 Villeneuve raced in Formula One from 1977-82. In 68 career races, he won six times and finished 2nd in the 1979 point standings. He died on May 8, 1982, during a qualifying session for the Belgian Grand Prix.

This circuit was originally named Île Notre-Dame Circuit, but was renamed after Gilles in 1982.

Gilles' son Jacques Villeneuve became an accomplished race car driver. He won the 1995 Indy 500 and the season points championship. He moved on to Formula One and won the world drivers championship in 1997.
Links: en.wikipedia.org
333 views