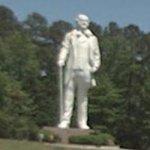 By Dania @ 2009-08-03 17:31:10
@ 30.660841, -95.511421
Huntsville, Texas (TX), US
Samuel Houston (March 2, 1793 – July 26, 1863) was a 19th century American statesman, politician, and soldier. Born on Timber Ridge, just north of Lexington in Rockbridge County, Virginia, in the Shenandoah Valley, Houston was a key figure in the history of Texas, including periods as President of the Republic of Texas, Senator for Texas after it joined the United States, and finally as governor. Although a slaveowner and opponent of abolitionism, he refused, because of his unionist convictions, to swear loyalty to the Confederacy when Texas seceded from the Union, bringing his governorship to an end. To avoid bloodshed, he refused an offer of an army to put down the rebellion, and instead retired to Huntsville, Texas, where he died before the end of the Civil War. His earlier life included encouraging emigration to Tennessee, time spent with the Cherokee Nation (into which he was adopted and later married into), military service in the War of 1812, and subsequent successful involvement in Tennessee politics. Houston is the only person in U.S. history to have been the governor of two different states (although others were governors of multiple American colonies). A fight with a Congressman, followed by a high profile trial, led to his emigration to Mexican Texas, where he soon became a leader of the Texas Revolution. He eventually supported annexation by the United States rather than seeking long term independence and expansion for Texas. The city of Houston was named after him during this period. Houston's reputation survived his death: posthumous commemoration has included a memorial museum, a U.S. Army base, a national forest, a historical park, a university, and the largest free-standing statue of an American figure.
Links: en.wikipedia.org
881 views