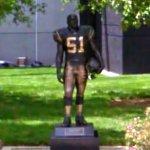 Before joining the Panthers, he played nine seasons with the New Orleans Saints. After retiring in 1997, he remained with the Panthers as a linebackers coach. He passed away in 2005 after a 20-month battle with cancer.
Links: en.wikipedia.org
1,573 views