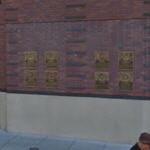 The Giants Wall of Fame recognizes retired players whose records stand highest among their teammates on the basis of longevity and achievements.

Those honored have played a minimum of nine seasons for the San Francisco Giants, or five seasons with at least one All-Star selection as a Giant.
Links: www.mlb.com
1,003 views