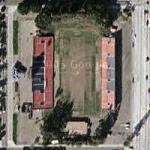 The venue once hosted the Los Angeles Braves of the International Roller Derby League!!!

The field itself is called Eddie West Field while the entire building is the Santa Ana Municipal Stadium.