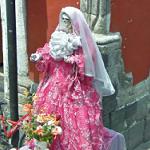 By Mike1989 @ 2012-08-20 10:17:12
@ 19.433169, -99.127875
Mexico City, Mexico (MX)
Santa Muerte is a sacred figure venerated primarily in Mexico and the United States, probably a syncretism between Mesoamerican and Catholic beliefs. The name literally translates to "Holy Death" or "Saint Death." Mexican culture since the pre-Columbian era has maintained a certain reverence towards death, which can be seen in the widespread Mexican celebration of the syncretic Day of the Dead. Catholic elements of that celebration include the use of skeletons to remind people of their mortality.
Links: en.wikipedia.org
774 views