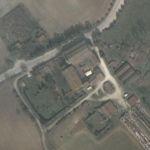 In the twelfth century boasted the possession of about 50 churches and 10 buildings including castles and villas with all the property attached. In 1180 he joined at the Hermitage Camaldoli Camaldolese inserting in the congregation.

L 'importance' s Abbey was increased by the law of Abate to exercise civil and criminal jurisdiction, including the right to life and death.

The territory from the Red Gorge to Moie, including Castle Massaccio (Cupramontana now) and in Ancient at St. Marcellus, was under his jurisdiction.
Links: www.abbaziasantelena.com
422 views