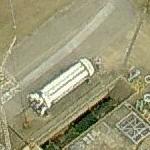 Built in 1957 by the Army Ballistic Missile Agency and transferred to NASA, this facility became the primary center responsible for the development of large vehicles and rocket propulsion systems. During the 1960s, under the direction of Dr. Werner von Braun, the Saturn Family of launch vehicles was developed here. Through its continual use and modification to meet the demands of new programs, this facility illustrates the primary mission assigned to the Army Ballistic Missile Agency and the Marshall Space Flight Center--the development of large launch vehicles and propulsion systems needed to support the American Space Program.
Links: pdfhost.focus.nps.gov
909 views