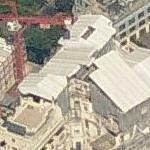 By jdubble07 @ 2012-06-05 07:40:24
@ 48.86397827, 2.29335062
Paris, France (FR)
Princess Maha Al-Sudairi, ex-wife of Saudi Crown Prince and deputy prime minister Prince Nayef bin Abdulaziz – who is second-in-line to the Saudi throne was caught attempting to sneak out of Paris' exclusive Shangri-La hotel, along with her entourage of 60 servants without paying her $7M hotel bill. Since the princess is protected by diplomatic immunity, police were unable to arrest or even charge her with an offence.

The princess had been staying at the hotel since December 23, 2011 having booked the entire hotel for herself and her staff. Up until then she had been confined to a palace in the middle eastern state by Saudi King Abdullah after leaving behind a trail of unpaid bills with luxury firms across Europe, reportedly including Dior, jewellery outlets Chaumet and Victoria Casal, and at least one hotel.
Links: screen.yahoo.com
1,009 views