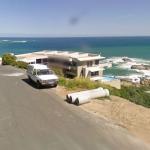 The film starred Daniel Craig, released on 13 April 2008, and was mainly shot in Cape Town in South Africa, and England.

The house has eight bedrooms and went to market at a guide price of 4 million British Pounds (around 6.6 million US Dollars).
Links: www.telegraph.co.uk, en.wikipedia.org
801 views