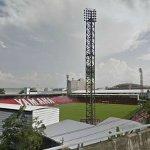 By WacoKidd110 @ 2012-03-26 07:34:10
@ 13.919046, 100.546975
Ban Mai, Thailand (TH)
SCG Stadium, which also known as Thunderdome Stadium and Yamaha Stadium, is a football stadium located in Nontaburi, Thailand, and is the home of Thai Premier League's side, Muangthong United. SCG Stadium was the first operate football stadium in Thailand, while PAT Stadium and TOT Stadium constructed without operate including there are others older stadiums, they're all considered as multi-purpose stadiums.
Links: en.wikipedia.org
792 views