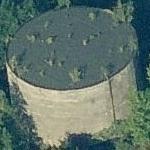 The only structure which was created as a part of his grandiose plan was a huge concrete cylindrical test block called Schwerbelastungskörper ("Heavy Loading Body"). It was built in 1941 to test the load bearing strength of the Berlin soil where the massive Triumphal Arch was to be constructed.
Links: armchairtravelogue.blogspot.com
7,803 views