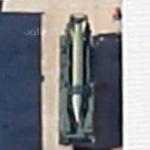 By kjfitz @ 2013-09-19 19:39:33
@ 34.644954, -86.658772
Huntsville, Alabama (AL), US
Scud is a series of tactical ballistic missiles developed by the Soviet Union during the Cold War. It was exported widely to other countries, in particular third world countries. The term comes from the NATO reporting name Scud which was attached to the missile by Western intelligence agencies. The Russian names for the missile are the R-11 (the first version), R-17 and R-300 Elbrus (later developments). The name Scud has been widely used to refer to these missiles and the wide variety of derivative variants developed in other countries based on the Soviet design.
Links: en.wikipedia.org
474 views