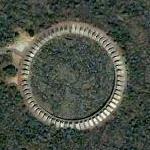 By kjfitz @ 2009-09-11 11:06:16
@ 19.318287, -99.182076
Mexico City, Mexico (MX)
Stepping out onto the edge of the sunken crater, you see 64 massive monolithic pyramids. They are set around the giant hole in the ground, filled to the brim with the creeping leaves of plants and the crawling legs of unseen buzzing insects of the UNAM’s Espacio Escultórico. Located in an ecological reserve in the south of Mexico City, the space was designed by a group of architects in 1979 according to esoteric ideas of ancient astrology and the movements of the cosmos. The man-made oasis—a mixture of solid concrete and an ever-changing organic landscape that shifts forms and colors with the seasons—represents the universe in its entirety. The sun moves across the solid blocks, a modern homage to the lost star-gazing civilizations that once occupied these volcanic rock lands, and today’s Mexico City spreads in all directions outside the walls but does not enter this quiet evocation of the ritual past that still simmers beneath its surface.
Links: openplac.es
987 views