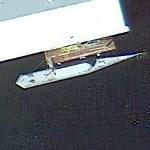 The Sea Jet demonstrates a few technologies that will be integrated into the Zumwalt class destroyer. Notable among these is the return of the tumblehome hull design.
Links: www.globalsecurity.org
1,087 views