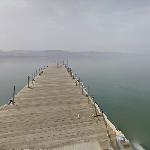 Much of the ministry of Jesus occurred on the shores of Lake Galilee. In those days, there was a continuous ribbon development of settlements and villages around the lake and plenty of trade and ferrying by boat. The Synoptic gospels of Mark (1:14–20), Matthew (4:18–22), and Luke (5:1–11) describe how Jesus recruited four of his apostles from the shores of Lake Galilee: the fishermen Simon and his brother Andrew and the brothers John and James. One of Jesus' famous teaching episodes, the Sermon on the Mount, is supposed to have been given on a hill overlooking the lake. Many of his miracles are also said to have occurred here including his walking on water, calming the storm, the disciples and the boatload of fish, and his feeding five thousand people (in Tabgha).
Links: en.wikipedia.org
2,360 views