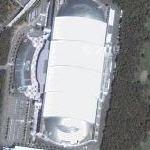 The Ocean Dome sported a fake flame-spitting volcano, artificial sand and the world's largest retractable roof, which provided a permanently blue sky even on a rainy day. The air temperature was always held at around 30 degrees celsius and the water at around 28.