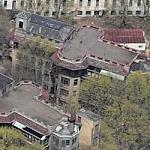 The proto-modern Seaview Hospital complex, planned and built between 1905 - 1938, was the largest and most costly municipal facility for the treatment of tuberculosis of its date in the country. The size of the complex was commensurate with the scope of the responsibility assumed by the City of New York in the world wide campaign mounted at the end of the 19th century to eradicate "the white plague." The building complex, together with its careful siting, adjacent landscaping and wooded surroundings, create the total therapeutic environment believed necessary for the successful treatment of tuberculosis.

Its design required from the architect a synthesis of architectural and planning skills for which few precedents existed. Of the many public buildings designed by Raymond F. Almirall for the City of New York, Seaview Hospital was considered by him to be his most significant. Further adding to its significance is the fact that the first successful clinical trials of drugs which finally yielded the long-sought non-deleterious cure for tuberculosis were conducted at Seaview Hospital.

Also, some photos of the deterioation of the site can be seen at www.forgotten-ny.com.

In addition, portions of the 2006 movie Freedomland were filmed here.
Links: www.preserve2.org
2,421 views