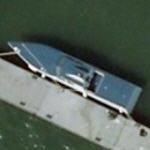 The stealth boat, to be used by the Royal Marines, is thought to be capable of reaching speeds of about 70mph.

The vessel will be used in various roles including the insertion of troops in enemy territory and the hunting of drugs smugglers.

It is believed to have been designed and built by VT Halmatic, based in Portsmouth, Hants, as a replacement for two boats currently used by the elite SBS.