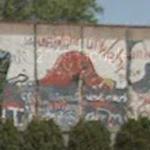 One year after the fall of the Berlin Wall, artist Edwina Sandys, granddaughter of Winston Churchill, proposed the idea of placing a piece of the Wall at the Westminster College campus. With the support of Westminster College, Sandys and her husband, Richard Kaplan, met with officials in East Berlin in February 1990. Upon arrival in Berlin, the couple realized their plans to secure large sections of the wall would be costly, as 4-foot (1.2 m)-wide sections were selling at a cost of $60,000 to $200,000. This obstacle, however, was solved when officials, impressed by the idea of a Berlin Wall monument being erected near the site of Churchill's 1946 "Iron Curtain" speech, allowed Sandys to choose eight sections as a gift to the College. Sandys chose her sections from an area near the Brandenburg Gate, frequented by artists, because of the dramatic color of the graffiti. The repeated use of the word "unwahr," within the sections, which in German means "untrue", also appealed to her.

On November 9, 1990, after a nine-month effort, the "Breakthrough" sculpture stood appropriately in the foreground of the College's Winston Churchill Memorial and Library. Joined by former President Ronald Reagan, then Governor John Ashcroft and German Minister Plenipotentiary Fritjof von Nordenskjoeld, Sandys introduced her sculpture to the assembled crowd. Forty-four years after her grandfather warned of an "iron curtain," the wide open doors of "Breakthrough" provided a concrete image of the newly realized freedom in Eastern Europe.
Links: en.wikipedia.org
929 views