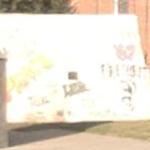 By GlobalPlayer @ 2010-04-21 01:23:55
@ 41.842776, -89.481995
Dixon, Illinois (IL), US
The Berlin Wall (German: Berliner Mauer) was a concrete barrier built by the German Democratic Republic (GDR, East Germany) that completely enclosed the city of West Berlin, separating it from East Germany (including East Berlin). The Wall included guard towers placed along large concrete walls, which circumscribed a wide area (later known as the "death strip") that contained anti-vehicle trenches, "fakir beds" and other defenses.

The separate and much longer Inner German border (the IGB) demarcated the border between East and West Germany. Both borders came to symbolize the Iron Curtain between Western Europe and the Eastern Bloc. Before the Wall's erection, 3.5 million East Germans had avoided Eastern Bloc emigration restrictions and defected from the GDR, many by crossing over the border from East Berlin into West Berlin. From West Berlin, emigrants could travel to West Germany and other Western European countries. During its existence from 1961 to 1989, the Wall stopped almost all such emigration and separated the GDR from West Berlin for more than a quarter of a century. After its erection, around 5,000 people attempted to escape over the wall, with estimates of the resulting death toll varying between around 100 and 200.
Links: en.wikipedia.org
710 views