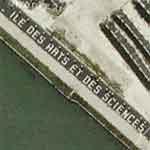 Île Seguin had been home to a Renault factory, constructed between 1929 and 1934. With 30,000 laborers at its peak, the last car from the Renault production line was a Renault 5 Supercinq in 1992. The factory remained dormant until 2005 when all the buildings had been demolished. Jean Nouvel, an architect, is leading a project to turn the island into a cultural hub.
Links: edition.cnn.com
637 views