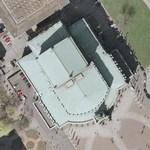 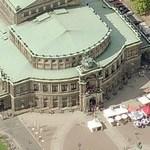 By DonMartini @ 2006-04-29 13:06:26
@ 51.05456712, 13.73517102
Dresden, Germany (DE)
The Semper Oper (German: Semperoper) or Saxon State Opera Dresden (Sächsische Staatsoper Dresden) is an opera house in Dresden, Germany, and is one of the most famous in the world. The building is considered to be a prime example of "Dresden-Baroque" architecture. It is situated on the Theater Square in central Dresden on the bank of the Elbe River. On top of the portal there is a Pantherquadriga with a statue of Dionysos. The interior was created by such famous architects of the time as Johannes Schilling. Monuments on the portal depict famous artists such as Johann Wolfgang von Goethe and Friedrich Schiller, William Shakespeare, Sophocles, Molière and Euripides. The building also features work by Ernst Rietschel and Ernst Julius Hähnel.


Interior of the first Semper Oper (opened 1841)It was first built in 1841, by architect Gottfried Semper, in the Early Renaissance style. It had to be rebuilt after a fire destroyed it in 1869. The citizenry demanded that Gottfried Semper do the reconstruction, even though he was in exile at the time because of his activities in the May Uprising in Dresden in 1849. So the architect had his son Manfred Semper complete the second opera house with his father's plans. This second one was constructed in Neo-Renaissance style in 1878. During construction, performances were held at the Gewerbehausall, which opened in 1870.

In the pre-war years, the building premiered many of the works of Richard Strauss.

During the last weeks of World War II in 1945 the building was destroyed again - this time by Allied bombing and the subsequent fire storms. Exactly 40 years later, on February 13, 1985 the opera was rebuilt almost the same as it was before the war. It reopened with the same opera that was performed last before the destruction in 1945: Weber's Der Freischütz.

During the flood of the Elbe in 2002 the building suffered heavy water damage. With substantial help from around the world, it reopened in December 2002.

Today, most operas are accompanied by the Sächsische Staatskapelle orchestra of Dresden. Performances are nearly always sold out.
944 views