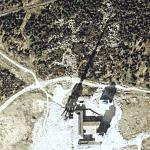 By Hinkkanen @ 2006-04-30 05:35:03
@ 51.800966, 10.6154
Germany (DE)
There are two towers here. The older one (on the left) is the world's first television tower built in 1935. It began by broadcasting the "Deutsche Reichspost". It carried the first television broadcast of the Olympics in 1936. The tower continued functioning until September, 1939, when the authorities suspended broadcasting on the outbreak of World War II. In the first half of the 1990s the transmitting aerial of the old tower was removed and replaced by a radome holding air traffic control radar equipment.

The new tower (on the right) was built 1973-76. This 123-meter, freestanding steel-tube tower stands on three legs, which hold shafts for cable and stairways for personnel access. The Sender Brocken is property of Deutsche Telekom.
Links: en.wikipedia.org
582 views