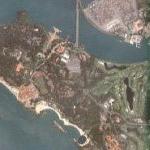 By Hinkkanen @ 2006-01-29 07:41:38
@ 1.249939, 103.826122
Singapore (SG)
Sentosa, which means tranquillity in Malay, is a popular island resort in Singapore, visited by some two million people a year. A major tourist attraction, it hosts a sheltered beach of more than two kilometres in length on its southern coast, a musical fountain which uses the interaction of lasers against water particles to create three-dimensional images, and historical fortifications in Fort Siloso, dating from World War II. There are also two golf courses and two 5-star hotels.
Links: en.wikipedia.org
1,626 views