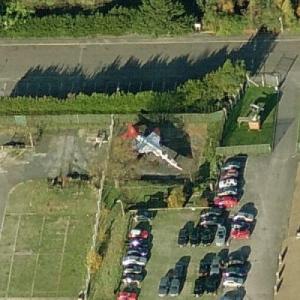 By adrbr @ 2008-02-28 21:03:22
@ 51.282631, -0.754154
Farnborough, United Kingdom (GB)
The Jaguar T2 (or Jaguar B according to the manufacturer's designation). The Jaguar S and B had a more comprehensive nav/attack system than the A and E models used by the Armée de l'Air, and used 30 mm Aden cannon instead of 30 mm DEFA 553s. Some RAF Jaguars were used for rapid deployment and regional reinforcement, operating with the Coltishall wing, and others flew in the nuclear strike role from RAF Bruggen. The latter aircraft were the RAF's only single-seat strike platforms, and were soon replaced by Tornados.