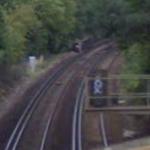 By kkeps @ 2013-01-02 18:13:34
@ 51.283956, .172766
Sevenoaks, United Kingdom (GB)
The Sevenoaks railway accident occurred on 24 August 1927 between Dunton Green railway station and Sevenoaks railway station. The Southern Railway's afternoon express from Cannon Street to Deal left London at 5pm, in charge of River Class tank engine No 800 River Cray. Several passengers later recounted that from time to time the train seemed to roll excessively on fast curves. As it passed through Pollhill Tunnel at 60 mph the rocking became violent and the train derailed past Dunton Green railway station. Unfortunately, at this point on the line, the line is in a cutting which is spanned by a bridge carrying Shoreham Lane, which the cab of the locomotive struck, turning it on its side across the cutting. The leading coaches piled up against it, killing 13 and injuring many more (railway engineer Archibald Jack survived).
Links: en.wikipedia.org
495 views