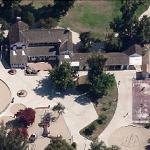 It was acquired in 1948 by another screenwriter, Ranald MacDougall, whose credits include "Mildred Pierce" and "Cleopatra." In 1961 movie director William Wyler used the ranch house as a filming location for 'The Children’s Hour', based on the play by Lillian Hellman.
Links: en.wikipedia.org
667 views