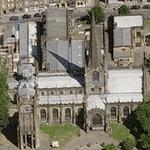 The site of the cathedral has a long history of Christian use. The shaft of the 9th century Sheffield Cross, believed to have formerly been sited here, is now held by the British Museum. Sheffield's first parish church, a satellite of Worksop Priory, was constructed here in the twelfth century by William de Lovetot at the opposite end of the town to Sheffield Castle. This established the area of the parish of Sheffield, unchanged until the 19th century. This first church was burnt down in 1266 during the Second Barons' War against King Henry III.

A second parish church was completed in 1280, but this church was mostly demolished and rebuilt about 1430 on a cruciform floor plan. The Shrewsbury Chapel was added in the next century, and a vestry chapel (now the Chapel of Saint Katherine) was added in 1777. The north and south walls of the nave were rebuilt in 1790–3 and a major restoration by Flockton & Gibbs—which included the addition of new north and south transepts to restore the cruciform plan—was completed in 1880. The church was originally dedicated to Saint Peter, but from some time after the reformation into the 19th century it was dedicated to Holy Trinity, it has since been dedicated to both Saint Peter and Saint Paul.

The parish of Sheffield was subdivided into smaller parishes in 1848. The church is still the parish church for the smaller Parish of Sheffield, but in 1914 it was also made the cathedral church for the newly-created Diocese of Sheffield. Plans were drafted by Charles Nicholson to extend the church and reorient it on its axis, but due to World War II these were greatly scaled down. The resulting additions leave the church an awkward shape in plan, but with an impressive south elevation.
Links: www.sheffield-cathedral.co.uk
678 views