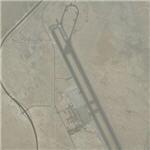 It hosts the Royal Bahraini Air Force (RBAF) Fighter Wing and the two squadrons that comprise it.

During the first Gulf War, some of the Coalition forces, having trouble with the Arab pronunciation, knew the base under the name "Shakey's Pizza".

Fighter aircraft are stored in 10 buildings located at either end of the runway.

In March 2009, the United States Air Force established a camp on Isa Air Base to support aerial port operations. The unit was designated a detachment of the 379th Air Expeditionary Wing of Al Udeid Air Base, Qatar. This detachment's purpose was to accelerate the delivery of mine-resistant, ambush-protected all-terrain vehicles to U.S. forces in Afghanistan.
Links: en.wikipedia.org
6,855 views