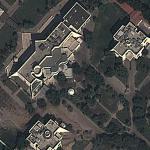 By jdubble07 @ 2012-06-09 16:40:19
@ 25.129419, 55.181547
Dubai, United Arab Emirates (AE)
Sheikha Sanaa Bint Mana Al Maktoum was the daughter of Sheikh Mana Bin Rashid Al Maktoum, famous for the reform movement in Dubai in 1938–1939. Her father, along with key figures from trading families in Dubai, was deported after a civil war with the Ruler Sheikh Saeed II bin Maktum and his son Rashid bin Saeed Al Maktoum (who later became the Ruler). The cause of this civil war in Dubai was their call for more people's right and more participation in the ruling of the emirate as well as more nationalistic approach to education and commercial management. Many of the key commercial family members were killed and tortured.

After her father was deported, Sheikha Sana was forced, at the age of 10, to marry Sheikh Saeed bin Maktoum's second son, Khalifa. She was the mother of Mana and Rashid. Her son Mana was the head of the Ruler's Office for more than 20 years during the time of Rashid Bin Saeed.

Sheikha Sana was famous for her love of poetry and support of the local intelligencia. She was, herself, a poet who demonstrated her sadness with repression for what happened to her family. She lived as a key woman in Dubai and her majlis was one of the key gatherings in which, occasionally, men also visited.